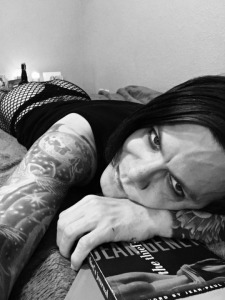 I wanted to send my sweetheart a cute selfie tonight.  We will not be seeing one another for a few days, and this is literally what I look like in bed, so I figured why not?  I look fucking good.  I’ve been feeling myself hard lately, and not ashamed to admit it.  I wore a ton of make up to the gym the other night, and chuckled internally just a little bit at the bros giving me a wide berth as I made my way to the squat rack with Black Sabbath’s Paranoid blaring in my headphones.

I’ve hit a wall with my writing the last few weeks.  I have two larger pieces in progress, and I just don’t know how to land the first one, and the second one, well some of the subject matter just feels so raw somehow to dive into fully.  So instead I write short poems, and read a lot.  I don’t do enough work revising pieces intended to submit to journals.  I keep meaning to, and I keep running out of time in the day.

I’ve been playing with gender expression regularly lately for the first time in a long time.  In so many ways it’s still such a strange and terrifying journey.  I grew up effeminate and sensitive in your slightly more homophobic and right wing than average family.  My lack of masculinity and sensitivity quickly made me a target for bullying, and soon after it made me a target for sexual violence when a few of the older kids in the neighborhood got me alone.

By the time I was seven, I was well on my way to learning to keep parts of myself cold and buried forever.

And those pieces of myself refused to stay buried.  For that, I am so, so lucky.  This isn’t to say I didn’t grow into one hell of a vicious streak, and that I don’t still have plenty of ruins to undo, but still.  I’m so blessed to not have a head that is entirely filled with bad memories and broken glass.  I’m lucky enough that I figured out how to not let my trauma define me.

I have spent my life surrounded by some of the most courageous and loving people on the face of this battered earth.  I don’t know how any of us could have made it through this burning nightmare that is the modern world without one another.

Middle school in the 90’s, and tough girls in combat boots taught me how to wear raccoon eyeliner like my idol Robert Smith.  When I was in high school, I played in bands with boys who cried, and crusty punk girls who punched nazi skinheads at shows.  I hit my early twenties and came out as genderqueer.  I wanted my gender to be total negation.  I didn’t want a gender at all.  I would wear all black everything, and keep my face shaved a smoothly as possible.  I learned to only share my body with those who I could actually be intimate with.  Nobody else deserved it, or could even understand this strange and distorted reflection I saw myself in.

When it was time to drop out of the rat race we’re expected to inherit when we get out of college as soon as I fucking could.  I hopped freight trains and into speeding vans with fearlessly criminal trans women who survived and braved lives that I could scarcely imagine on and off the streets while I was still dreaming of running away from Southern York County.

In my late twenties and early thirties, still trying so hard to live bravely through trauma and mental illness, I allowed black and white thinking to cloud my vision.  In this world supposedly without boundaries and binaries, I still found myself feeling as if the world held no place for me.  Maybe if I tried harder to squeeze into a binary, it would.  I would identify solely as a transwoman.

That part, I don’t really want to talk about, aside from noting that my exploration of this identity led to the worst mental health crisis I have ever faced in a life that has been well, kinda filled with mental health crises.  It took years to pick up the pieces and get back to where I am right now; which is living relatively comfortably in my occasionally made up and lace adorned skin.  While existing in this gender fluid space with relative ease, I also I live in awe of all the courageous, creative, and criminal queers that came before me.  The trans women, the gender benders, the fags, and the dykes that fought and died so I could be right here.  I think about the QTPOC who threw bricks at cops a decade before I was even born, and live with a lack of privilege that I can scarcely comprehend.

All this to explain one cute selfie.